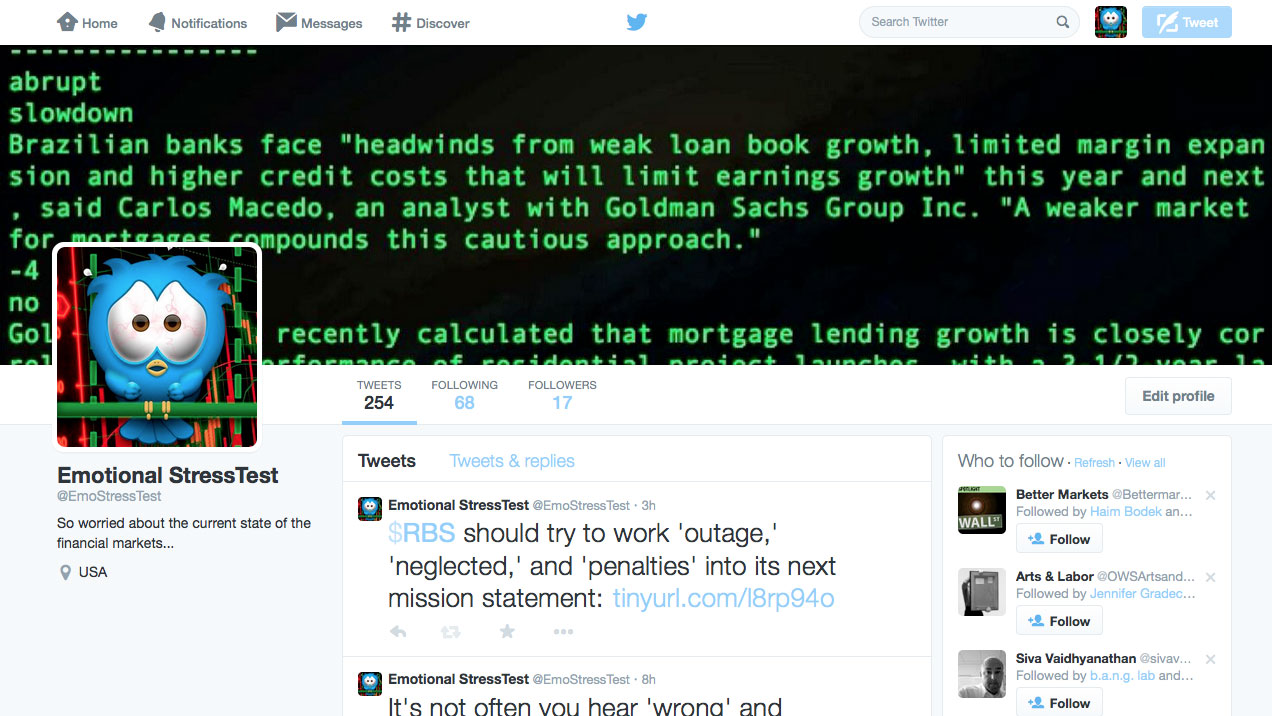 Emotional Stress Test is an alternative interface to the automated stock market activated by stress and designed to target the stock price of banks that have cause financial and emotional duress to the public. People can interact with Emotional Stress Test either through a Galvanic Skin Response sensor (GSR) or by sending a tweet to @EmoStressTest that includes the word stress. When the bot knows people are experiencing anxiety, @EmoStressTest sends out tweets designed to make the financial institutions also feel anxious.

Algorithms now perform the majority of stock trades, and those algorithms now use Natural Language Processing (NLP) to read Twitter. The right post on Twitter can affect the price of a stock, or crash the entire market. At the same time, numerous financial scandals have left many individuals in a precarious state of affairs and under a great deal of financial and emotional stress. There are many stories of financial institutions misdeeds circulating in the news and on Twitter, although from the perspective of a stock-trading bot—stories about criminal wrongdoing or fines are often considered irrelevant or even positive if it is perceived that the illegal behavior may be profitable. For example, when it was announced in 2010 that Goldman Sachs would pay the largest fine in history (at that time) to settle the SEC’s case that it intentionally mislead investors in its marketing of Collateralized Debt Obligations, Goldman Sachs’s stock actually jumped 4.4%--resulting in a financial gain larger than the fine.

Emotional Stress Test targets the stock of financial institutions that were found to be responsible for the 2008 crash or were involved in the Libor rate fixing scandal and submits tweets intended to make those institutions feel the same anxiety individuals are feeling by using the same NLP techniques as trading algorithms to find the phrases and news stories most likely to negatively impact the stock price of its target.