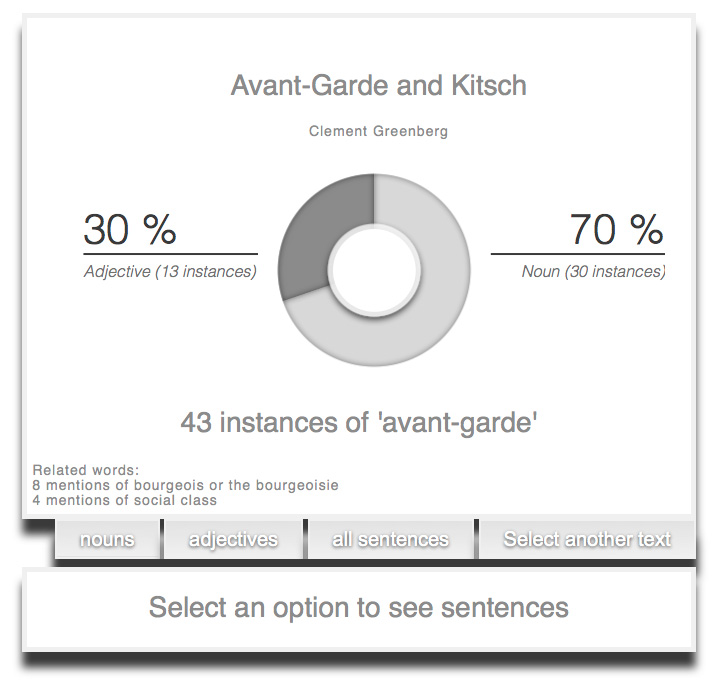 Avant-Garde Disambiguator is a web application that uses a custom built Natural Language Processing (NLP) algorithm to determine if the word ‘avant-garde’ is being used as a noun or adjective to help distinguish between two meanings of the word.

The term ‘avant-garde’ originated as a term used by the French military to refer literally to the ‘front guard,’ or the first line of military defense. The acquisition of the term by artists and creative types came in 1824 when the French utopian socialist Henri de Saint-Simon attempted to incite artists to lead the charge for a technocratic socialist revolution by saying: [show more]

“We, the artists, will serve as the avant-garde: for amongst all the arms at our disposal, the power of the Arts is the swiftest and most expeditious.”

‘Avant-garde’ then began to refer to a specific type of artist seeking radical political and social change, such as Gustave Courbet and the other members of the Federation of Artists who helped overthrow the government and barricade the streets of Paris in the late-nineteenth-century. However, over time ‘avant-garde’ became an adjective for artists, and artistic styles concerned with formal innovation, regardless of their political or class orientation. Artists, art historians and theorists have capitalized on this ambiguity, often conflating the various meanings of the term to such an extent that descriptions of luxury goods produced for high-end art galleries have often been articulated with the same radical vernacular once reserved for actual revolution.

Determining the part of speech for ‘avant-garde’ requires additional sensitivities to the nuances of the word than standard NLP processing libraries are currently capable of. The program also searches the same texts for instances of ‘vanguard,’ ‘bourgeoisie,’ and references to social class to further aid in the parsing of radical politics from aesthetic metaphors. The ability to sort chronologically and by geography is currently being developed. The Avant-Garde Disambiguator and the data it creates could be of value to anyone interested in the linguistic evolution of art-speak. [show less]